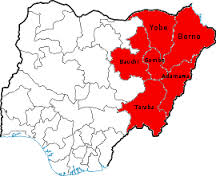 There are enormous challenges for Governors in the northeastern states torn by Boko Haram senseless war. In Borno, Yobe, Adamawa including some parts of Gombe and Bauchi states, there are widespread human movement of internally displaced persons (IDPs), insecurity, destroyed infrastructure and inaccessible land for subsistent agriculture. These problems have depressed the affected communities in these five states.
The governors of Borno, Yobe, Adamawa, Bauchi and Gombe are yet to unveil comprehensive and feasible post-war programmes and projects to restore communities to their pre-war peaceful and productive statuses. As the military is winning the war, communities in the northeast of the country expect the governors of these five states to come together, design programmes and projects to tackle the original factors that facilitated the growth of Boko Haram and helped the group in its recruitments and indoctrinations – abject poverty, illiteracy and the absence of employment opportunities in these states.
The Borno state governor, Kasim Shettima has announced the creation of a ministry charged with reconstruction, rehabilitation and resettlement of communities affected by Boko Haram insurgency. Kasim’s move is a good one, but what this war-torn states need is a strong collaboration between the states governments to create a multifaceted joint commission mainly for the restoration of basic infrastructure, integration of lives and livelihood of thousands of people, the quick rehabilitation of agricultural land; the local economy; places of worship, health-centres, bridges, boreholes, schools including the creation of productive employment for the teeming unemployed citizens and those engaged in unproductive-manual jobs. This will also facilitate the fast healing of the scars of war as well as complement the security restoration and peace building by the military. The creation of a joint commission is necessitated by some basic rationales- a collective approach by affected states, efficiency, and the opportunity to easily mobilize substantial amount of funds.
The commission should work in this way- affected communities should be identified, then a reductionist approach should be applied to restore the community and also provide it with basic infrastructure that was hitherto not available in the community. For instance, if Gamboro Ngala in Borno state is a community ravaged by the war, the commission should restore the community’s schools, water supply, arable land, market, rural electricity, in fact the entire basic infrastructure. If this is done, the lack of clear direction most war-torn communities suffer will be completely eliminated from Gamboro Ngala. Ten to twenty communities can be restored at once, because most of affected communities are not very large and reconstruction, rehabilitation and resettlement of a community may not be a billion naira project.
The big question is, where will the money to undertake such a ‘dream’ project come from? The five states of Borno, Yobe, Adamawa, Bauchi and Gombe have 96 local government areas (LGAs), there is no LGA in Nigeria that does not receive nearly 100 million naira a month from the federation account. If the 96 LGAs can contribute 5% of their monthly Federal Allocation Committee (FAC) subvention, that will translate into a whopping 5 million naira from each LGA per month. This means 480 million naira per month just from the 96 LGAs. Then, if each of the five states can contribute 50 million naira per month it will translate to 250 million naira. Definitely the federal government and some donor agencies will also contribute some good amount of money. If for instance, a billion naira can be generated every month, the impact can reach many war-torn communities in short time.
If this approach is employed to reconstruct, rehabilitate and resettle the communities ravaged by Boko Haram senseless war, it will fast track the healing of the scars of war, restore basic infrastructure and local economies, including returning these communities to their pre-war or even better conditions. Though, this approach can only work if a time-frame is set for the commission to conclude its assignment. Projects and programmes to be carried out in each community is identified and specifically stated while rules and procedures are put in place to avoid turning the commission into a vehicle for awarding contracts to friends and cronies. Finally and most importantly, governors of the affected states must show commitment and strong political will to make the scheme work.
Zayyad I. Muhammad writes from Jimeta, Adamawa State, zaymohd@yahoo.com, 08036070980.

The PDP and the North