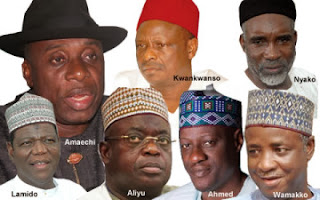 The leadership of the Peoples Democratic Party was rattled by the meeting of the leadership of the All Progressive Congress and some of the aggrieved governors of the Peoples Democratic Party in Sokoto, Sokoto State on Tuesday.
The APC leaders, who were in Sokoto for the inauguration of the Sokoto State University , where the meeting was held, were a former Head of State, Gen. Muhammadu Buhari (retd.) and a former Governor of Lagos State, Asiwaju Bola Tinubu.
Members of the New PDP who were in attendance were the governor of the state, Alhaji Aliyu Wamakko; Governors Rabiu Kwankwanso (Kano); Rotimi Amaechi (Rivers), Murtala Nyako (Adamawa); and Sule Lamido (Jigawa).
Two of the aggrieved governors, Aliyu Babangida(Niger) and Abdulfatah Ahmed (Kwara), were absent at the event.
However, the Speaker of the House of Representatives, Mallam Aminu Tambuwal, was at the event, where no Federal Government official was present.
Investigations by our correspondent showed that the meeting of the APC leaders with the rebel governors was a topic for discussion among members of the National Working Committee of the PDP on Wednesday.
A member of the committee, who spoke with our correspondent on condition of anonymity, said it was almost certain that the rebel governors were out of the ruling party.
He said the NWC of the party was surprised that the rebel governors were no longer hiding their disdain for the party.
He said though the issue was not on the agenda of the Wednesday’s meeting, the matter was discussed informally among the NWC members.
The source said, “Though the gathering was about opening of a university, why was the event dominated by those who are against us?
“We have been hearing that these governors are planning to defect to the APC. Maybe that was why they invited the leaders of the party and used the opportunity to concretise their discussions. We are watching.”
Reacting to the issue, the Deputy National Publicity Secretary of the party, Mr. Ibrahim Jalo, told our correspondent that the party believed that the gathering had no political undertone.
Jalo said the party believed what Wamakko said, which was that the event was for the inauguration of the state university.
He said, “The event was a mere gathering. We also believe that it was, according to the governor, meant to open the state university as stated by the governor.
“Apart from that, we believe that these people are free to meet and discuss as guaranteed by the Constitution. The Constitution guarantees freedom of association.”
However, the party said it had directed party leaders in zones, states, local government areas and wards to establish disciplinary committees in accordance with its constitution.
A statement by the National Publicity Secretary of the party, Chief Olisa Metuh, said the action was in tandem with the “focused determination of the national leadership of the PDP to ensure discipline and loyalty at all levels.”
Culled from Punch

My pact with Adamawa people – Ribadu