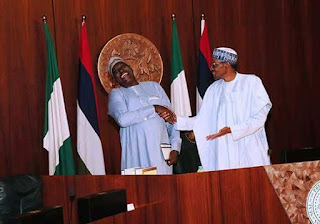 President Muhammadu Buhari’s stance on corruption is indisputable; while his government has exhibited genuine and commendable efforts to restore the northeast to its pre-war peaceful status. However, it is facing a big test with recent revelations linking Secretary to the Government of the Federation, Babachir David Lawal, a trusted inner circle member of President Buhari, to abuse of funds meant for the Internally Displaced Persons in the North-East. The Senate has called for Babachir to resign due to the allegations. This is an acid test of the President’s stance on corruption and his resolve to rebuild the northeast.

Should Babachir resign? – he’s being accused of abuse of office, inflation of contracts and also complicit in 21 bogus contracts awarded to families, friends, cronies and the members of Presidential Initiative for the North East (PINE).


Babachir’s resignation, if it happens, will be just a temporary solution. The best solution is the command given by President Buhari that the AGF commences investigation of any government official alleged to have been involved– if Babachir is found to be a party to any breach of laid down process and procedure, many people including Buhari will be disappointed in him. Besides, he is from the northeast and his local government area of Hong in Adamawa state is among the most affected areas by Boko Haram senseless war.

Anti corruption war is a major unique selling point for Buhari. So, any accusation of corruption against a member of the inner-circle of his government attracts public attention. However, we must bear in mind that for every corruption accusation against a Buhari lieutenant, two possibilities could be drawn: individuals currently facing corruption charges are working hard to paint every member of the government as also corrupt so as to rubbish the government’s fight against corruption. Secondly, those who are used to government patronage and are no more in the ‘loop’ are also working hard to see that those getting government contracts are being portrayed as benefiting from cronyisms.

President Buhari is a man who, when he trusts someone, he hardly distrusts such a person based on insubstantial reasons. So some people can easily take advantage of that to commit some shady acts behind the General. We must not also forget that public office in Nigeria comes with some privileges, authority and huge funds to spend, so if one does not apply measured restraint and discipline he/she can easily fall into the trap of corruption without even knowing.

Babachir has been working with Buhari for a long time, most people believe he knows who Buhari is more than many people in the present government and it will be highly surprising if he is involved in things that tarnish Buhari’s globally commended efforts in the North-East.

Babachir is a poor politician who only sticks to people from his clan and hardly stretches his handshake to other people; he also lacks efficient image managers. With his age, experience and trust bestowed on him by Buhari; it is hardly a possibility that he will condone arbitrary award of contracts to families, friends and cronies of his and other members of the committee. With the level of discipline being brought into public service, it is almost impossible that the members of such a sensitive committee will overlook raw abuse of due process. Though, we do not expect the present government to award contracts to it ‘enemies’. The accusation must be seen as untrue except proved otherwise. Nonetheless, Babachir must come out clean, because the accusation is heavy with stark similarities with Dasuki’s armsgate. Corruption has been the major factor that has helped in prolonging the insurgency in the northeast.

A Case for a Ministry of Rural Development