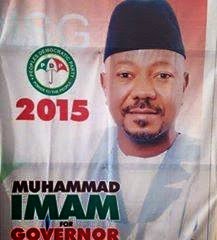 The secret behind the unanimous endorsement of Muhammad Imam as the governorship flag-bearer of the Peoples Democratic Party (PDP) in Borno state by leaders and all stakeholders of the party is simple- they wanted to match a ‘stallion’ against a ‘stallion’. Imam is the only candidate that can comfortably and fiercely challenge Kashim Shettima of the All Progressives Congress, APC in the February 28, 2015 governorship polls. With this match-up, the Borno governorship race is tipped to be an endurance horse race.
Imam, a former chairman of the defunct All Progressives Peoples Party (ANPP) in Borno state, is a rare-breed politician with strong political pedigree and is well-connected to the people especially at the grassroots. For Borno PDP to effectively challenge the incumbent government they need to present to the public a candidate that is well known them, that enjoys state-wide political connections and has the capacity to withstand any political storm. And in Imam, they have their man.
The public approval of Imam’s candidature by the PDP national Leaders, Honorable Mohammed Wakil, Minister of State for Power and Borno PDP stakeholders is a smart move. The move is poised to further establish Imam as a formidable force to help the PDP defeat the incumbent. This explains why Imam’s emergence has had the opposition wobbling.
Zayyad I. Muhammad, zaymohd@yahoo.com, 08036070980. He blogs at www.zayyaddp.blogspot.com