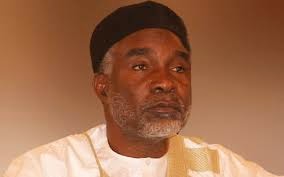 Embattled Adamawa State Governor, Murtala Nyako, has been impeached.
The governor was removed a while ago as the state House of Assembly deliberated on the report of an investigative panel that probed allegations of financial misconducts against him.
Earlier, the state Deputy Governor, Bala Ngilari, resigned from office to avoid being impeached.
Mr. Ngilari’s resignation letter was read at plenary by the speaker of the Assembly, Umaru Fintiri, after which the lawmakers approved it.
The House is sitting today to consider the report of the seven-member investigative panel, appointed to probe allegations of financial impropriety against the governor and his deputy.
The committee submitted its report to the House on Monday.
There is high security presence on the road leading to the Assembly and inside the complex.
A source, who works with the Assembly, told PREMIUM TIMES only staff and journalists are being allowed access into the Assembly.
The source requested not to be named because he had no permission to speak to journalists on the matter.
Details later….
culled from premium times

Between Kerosene and Cooking Gas