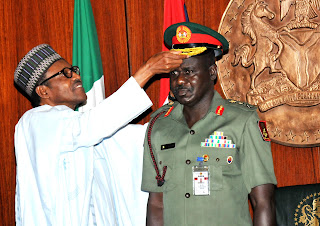 Lieutenant General Tukur Buratai, Nigerian Chief of Army Staff on Sunday 4th December 2016 urged the gallant Nigerian Army to embark on the final offensive action and a comprehensive sweep of the operational theatre in the Northeast with a view to ending the war against boko haram on a high note.

On a similar note, President Muhammadu Buhari, on Tuesday December 6th 2016, while speaking at a panel of Heads of State in Dakar, Senegal, at the 3rd Dakar International Forum on peace and security in Africa, assured the international community that the security situation in Nigeria has improved significantly – thus the end of Boko Haram terrorists was in sight. The two generals are not mincing their words; rather it is a show of political will from the political class and determination from the Nigerian Army to defeat the terrorists.

However, some people are questioning how feasible it is for the Nigerian army to completely clear the remnants of Boko Haram terrorist in the northeast by December. But most observers in Nigeria and the majority of the people in the northeast have confidence in General Buratai; his gallant officers and President Buhari’s political will to win the war against Boko Haram. They are very happy with the level of success recorded by the military so far. The people of the northeast are experiencing the difference between the sloppy handling of the war by Goodluck’s regime and the doggedness and commitment being shown by the Buhari government.

Anyone who comes to the northeast now will see the obvious resolve of the Nigerian army to win the war; confidence on the faces of the soldiers on ground; the number of war planes and their activities in skies especially from Yola airport will certainly tell any doubting Thomases that Buratai and his men are matching President Buhari’s words with action.

Buratai and his men are getting a massive approval from the northeast; people can now see that the military is in the offensive mode- taking the war to Boko Haram not waiting for Haram to come. Now Boko Haram is being chased out of villages and their camps in bushes, unlike before when they were capturing big towns and annexing local government areas and renaming them. Boko Haram is no longer holding a single territory in the 774 LGAs in Nigeria. This is a sweet thing to hear and every Nigerian should give Buratai and his men a pat on the back.

General Buratai is a well-trained officer of the Nigerian Army, he said: “I also wish to remind all troops that captured and surrendered Boko Haram terrorists must be treated humanely and fairly and in strict accordance with the provisions of International Humanitarian Law and Laws of Armed Conflict. In doing so, we must be prepared to enter all fortresses, camps, dens and enclaves of the Boko Haram to completely flush them out and dominate these areas to ensure they are not reoccupied”.

The people of the northeast are with Buratai, because they now see the Nigerian soldiers are very confident; fully kitted; well-armed and tackling Boko Haram head on. The people of the Northeast are appreciative of Buratai’s approach to the war- because now, the rights of people and their humanity are always protected by the soldiers while the war rages on. People now see the military as their shield and protectors unlike before when they feared both Boko Haram and the military.

With President Buhari’s political resolve and Buratai as chief of army staff, most people in the northeast believe the war will soon be won and most common people now have confidence to give vital information to constituted authorities that will help the government in winning the war.

Buratai and his men have a resolve to clear remnants of Boko Haram by December, the people of the northeast are happy and have strong confidence in Buratai, the feet on the ground and the commander-in-chief.

Morocco ‘Bans the Sale and Production of the Burka’

1,000 DAYS AFTER: PRESIDENT BUHARI RECOMMITS TO RETURN OF CHIBOK SCHOOLGIRLS