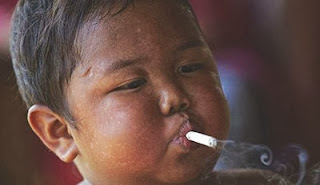 A toddler who shocked the world with his chain smoking has kicked the habit – but he’s piled on the weight ever since. Aldi Rizal, now aged five, was first discovered three years ago in a poor village in Sumatra, Indonesia, puffing on a cigarette while riding his tricycle.
He soon became a media sensation and the public outcry led to the Indonesia Government launching a campaign to stop children smoking. It also organised special rehabilitation treatment to help Aldi quit.
He was taken for play therapy sessions in Jakarta for two weeks to take his mind off his 40-a-day habit and learn to be a normal toddler.
A new documentary series revisits the family two years on to find out how Aldi is getting on, and reveals he has managed to stay off the cigarettes.
During his rehabilitation treatment, Aldi saw psychiatrists who encouraged his mum to keep him busy with playing and taught her about the dangers of smoking.
One of them , Dr Kak Seto still sees Aldi and his family at regular intervals to ensure he is not falling back into old habits.
His mother Diane helped him kick the habit. His mum, Diane, 28, said: “There are many people still offering Aldi cigarettes, but Aldi says no. He says ‘I love Kak Seto. He would be sad if I started smoking again and made myself ill’.
“At first we were weaning Aldi off the cigarettes he would have terrible tantrums and I would call Dr Seto for help. But now he doesn’t want them.”
However Diane’s now worried about her son’s weight as he developed food cravings while quitting smoking. Diane said the strong-willed little boy now demands food in the same way he used to beg for cigarettes and the family struggles not to give in to his tantrums.
Diane said: “When Aldi first quit smoking, he would demand a lot of toys. He would bang his head on the wall if he couldn’t get what he wanted. That’s why I get him cigarettes in the first place – because of his temper and his crying. Now I don’t give him cigarettes, but he eats a lot. With so many people living in the house it’s hard to stop him from getting food.” Now Aldi has been advised to go on a healthier diet to lose weight. He now also helps his mum Diane and dad Mohamed out on their market stall where his bright bubbly character and cheekiness win him lots of attention.
Diane admitted; “I feel happy when people want to speak to him because they know him. But I feel annoyed when they refer to him as ‘the smoking kid’. It makes me feel like they are accusing me of being a bad parent.” Dianne and Mohammed decided to take Aldi to a nutritionist for medical checks and now they’ve been given advice on how to put him on a healthier diet so he can start to lose some weight. Nutritionist Fransisca Dewi said: “Aldi is very overweight, his weight doesn’t match his age. His ideal weight is 17kg to 19kg. He’s 24kg already. I think it is difficult for them. The mother says Aldi is a spoilt kid. If Diane wants to forbid him eating, it will be hard”
•SOURCE: DailyMirror, UK

The Gang-up Against Ribadu