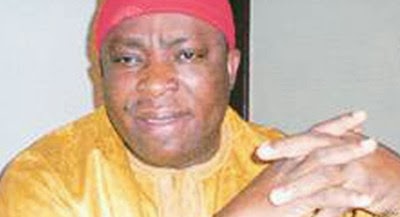 The Federal High Court, sitting in Abuja, Wednesday removed the National Chairman of the All Progressives Grand Alliance (APGA), Chief Victor Umeh and the party’s National Secretary, Alhaji Sani Shinkafi, from office.
A chieftain of the party, Chief Maxi Okwu, had sued Umeh, Shinkafi and the Independent National Electoral Commission (INEC), challenging their stay in office beyond what the constitution of the party provided for.
But in a swift reaction, the party rejected the judgment, saying it was delivered in disregard to a judgment of the Court of Appeal which had upheld Umeh as the chairman of the party.
Umeh and the party have also filed an application to suspend the execution of the judgment.
In his judgment, Justice Abdul Kafarati held that the plaintiff had a locus standi, going by the affidavit in support of the originating summons to institute the suit as against the objection brought by the defendants challenging the legal interest of Okwu in instituting the suit.
The court further held that every member had a duty to abide by the constitution of the party and that in any instance where the constitution was breached, the court would have jurisdiction to come in.
Justice Kafarati however made a declaration that Umeh who had been in office for over 10 years, could not validly continue in office henceforth.
The court cited Article 18(2) of the constitution of the party, which provides that any official of the party can only stay in office for a maximum of two terms of four years.
The court further held that Umeh and Shinkafi having been voted into office by voice votes rather than secret ballots as stipulated by Article 18(3) of the Constitution of APGA were not validly elected.
It ordered Umeh and Shinkafi to vacate their respective offices of national chairman and secretary of the party.
Reacting to the judgment, Umeh said: “Justice Kafarati did not come to us as a surprise because the judgment was supposed to have been delivered on February 7,so the sudden change of date was obviously to ambush the programmes of APGA and enable the other side pursue their case at the election tribunal at Awka but clearly the judgment was delivered without jurisdiction.
“The judgment is an attempt to execute the judgment of the Chief Judge of Enugu State, Justice Innocent Umezulike, so it was that convention that was purportedly conducted that the judge relied on to make Maxi Okwu chairman. Justice Kafarati was gravely in error, so there is nothing to worry about, the convention has no foundation, and the said convention relied on by the court has been set aside by the Court of Appeal, we are unruffled by the judgment because we know that the court of appeal will at all times protect its judgment.”
He said he and the party leadership had given notice of appeal against the court judgment and had also asked for a stay of execution of the court order until its appeal is considered.
Shinkafi who spoke with journalists after the judgment wondered why a high court would make an order against APGA even when it was not a party to the case.
He described the judgment as a fraud and that it would be challenged in a higher court.
However, the party has applied to the court to stay execution of the judgment.
APGA’s lawyer, Chief Patrick Ikwueto (SAN) also asked the court for an order of injunction pending appeal to restrain the Okwu faction from interfering with the leadership and management of APGA.
Okwu had instituted the suit on August 19, 2013 against Umeh Shinkafi and INEC seeking an order directing Shinkafi to vacate his office as the national secretary of the party having been first elected into office on January 10, 2003, and was re-elected for a second tenure, which expired on January 9, 2010.
He prayed for an order directing the first and second defendants and all officers they represented to vacate their offices forthwith not having been elected in accordance with Article 18(4) of the constitution of the party which prescribed that election into the offices shall be by secret ballot, and an order directing INEC to deal with Okwu’s leadership of APGA.
thisdaylive.com

The Next Adamawa Governor

Buhari Releases $1.5m Each to 36 States, FCT for Healthcare Projects