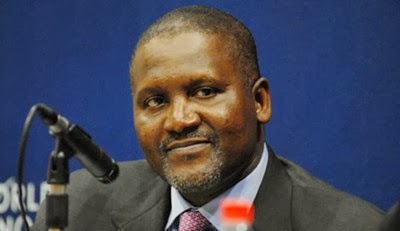 Crude oil output may drop by 300,000b/d, says NNPC
Dangote Group, led by Africa’s richest man, Aliko Dangote, is considering the purchase of oil blocks as international companies plan to sell onshore assets in Nigeria.
The company, which has interests from cement to sugar, needs to secure a supply of crude oil and a “substantial amount of gas” for a $9 billion oil refinery and petrochemical complex it plans in South-west Nigeria, Group Executive Director, Devakumar Edwin, said in a recent interview in Lagos. He said the company also needed energy for its cement plants in Nigeria.
“We’re seriously thinking of investing in oil blocks both for gas and oil,” Edwin was quoted by Bloomberg as stating.
“We’ve started talking with some companies which are divesting from onshore,” he said, declining to name them.
International oil and gas explorers including Royal Dutch Shell and Chevron are selling onshore and shallow-water fields in Nigeria amid persistent violence and crude oil theft in the oil-rich Niger Delta, with smaller Nigerian companies taking their place.
Dangote “will require feed stock for the refinery,” Pabina Yinkere, the head of research at Lagos-based Vetiva Capital Management Limited confirmed by e-mail yesterday. With its “aspirations of becoming a global cement name, and the importance of energy in the cement production process, this could serve as a complement in the long run.”
Dangote Group believes it can manage unrest and aggrieved communities in the region with corporate social initiatives, Edwin said.
“We know the terrain much better, we know the risks and we believe that the risks can be managed. “The primary risk is people blasting your pipelines. I wouldn’t like to go and invest in a block which is totally inland and then I have to start buying inland pipelines,” he said.
Armed attacks mainly in the delta’s swamps and shallow waters have reduced Nigeria’s oil output by 29 percent between 2006 and 2009, according to data compiled by Bloomberg.
Although the violence eased after thousands of fighters accepted a government amnesty offer and disarmed five years ago, a surge in oil theft by gangs tapping crude oil from pipelines pushed output down to four-year low last year. Nigeria pumped about 1.9 million barrels of crude a day last month.
Dangote’s complex will include a 400,000-barrel-a-day refinery, a 2.8 million-metric-ton urea plant and a petrochemical factory to produce polypropylene, used to make plastics. The company plans to expand the refinery capacity by another 100,000 barrels, Edwin said.
Nigeria relies on fuel imports to meet most of its needs due to mismanagement, poor maintenance and aging equipment at its four refineries. Dangote’s refinery will cut fuel imports for the country in half, according to the company.
In a related development, the Nigerian National Petroleum Corporation (NNPC) has warned that Nigeria’s daily crude oil output may drop by about 300,000 barrels per day (bpd) from its current 2.4 million barrels per day (mbpd) following new reports of breach on some of its major pipeline network.
The Group Managing Director of the corporation, Andrew Yakubu, made this disclosure yesterday in Abuja during a briefing with journalists on rising challenges of gas supply to the country’s thermal power generation companies in Abuja.
Yakubu in a lucid clarification of NNPC’s constant challenges with crude oil production vis-à-vis pipeline vandalism and crude oil theft stated that each time it made a breakthrough by repairing breaks on its pipelines, another devastating case suddenly rears up, thus giving it the constant job of replacing its pipelines and completely militarising its pipeline rights of way.
The latest attacks, according to NNPC, have always been along its Nembe Creek, Trans-Forcados, Trans-Niger and Tumidaba-Brass pipeline network, all of which convey crude oil to oil terminals.
“Each time an effort is made, we experience some improvements in crude oil production but again, like you heard earlier, the gain we make is always short-lived by another wave of attack. In fact, as we speak, two days ago, on that same trunk line, we got another report that nine locations have being breached along that line and this is the frustration we are facing.
“This will deprive us of the much needed revenue to the Federation Account, and the impact of this is pinching because there is no month that we don’t have challenges in the Federation Account allocation, as this certainly goes a long way to aggravate the situation,” Yakubu said.
He further stated: “In fact, only recently, we got up to 2.4mbpd but with the recent vandalism last two to three days ago, if we take out Trans-Niger, we will be down by another 150,000bpd and if by any chance the Nembe Creek comes in again for whatever reasons, we will be down again by about 300,000bpd. That is the sequence of depletion in production capacity and by extension, the much desired revenue to the Federation Account.”
Yakubu said that means that Nigeria’s daily crude oil production figure would drop to about 2.1mbpd from 2.4mbpd. He however did not say when the production depletion would likely be restored.
“What we are experiencing on the crude oil pipeline is worse than what we experience on the gas pipeline and the cost of doing that is huge. In fact, for most of the lines – both the crude oil supply and distribution lines – we have fully militarised them.
“From Arepo to Atlas Cove they are fully covered by a whole detachment of police, from Warri to Benin are military personnel who are reclaiming all the rights of way for us, and all these costs are associated with what it takes and these are unrealisable flows from the challenges we face in carrying out our operations,” Yakubu explained.
thisdaylive.com