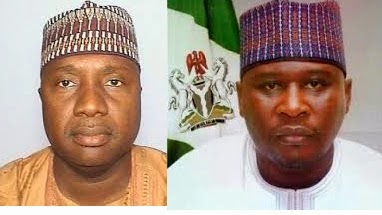 The contest for Adamawa governor will be neck and neck because the two major candidates Ahmadu Umaru Fintiri and Mohammed Jibrilla Bindawa share some similar treats and are poles apart at few.
Fintiri is a serving member in the Adamawa House of Assembly, while Bindawa is a serving Senator. Both are Muslims from the so-called Adamawa minority tribes- Fintiri a Marghi from Madagali Local Government while Bindawa, a Njayi from Mubi South Local Government. Both candidates are young, and were catapulted to their present positions by rare circumstances.
Apart from their lives and political profiles, there are certain five factors that will determine the votes they will get. These are: the ‘political-strength’ of their running mates; mother-tongue; geography; faith and the usual Nigerian money-politics. These five factors have become pivotal in shaping voting pattern in the state because of the present politics and the history of Adamawa politics since the former Gongola state.
Both candidates meticulously selected their running mates in order to attract maximum votes; Umaru Fintiri’s running mate, Barrister Afremu Jingi is well educated and has been in politics for some time, though he may not be conversant with the current reality of Adamawa grassroots politics because of his long stay at Abuja.
Fintiri pick Jingi to represent Adamawa Central. However some political pundits are surprise of this because of the current political permutation in Adamawa- the PDP has already stretched its limit in Fufore local government area, as regards positions allocated to Adamawa Central. Senate member, Bello Tukur, House of Representative member, Aminu Hamman Ribadu and the state chairman of the PDP, Joel Madaki are all from Fufore LGA. Moreover, Barrister Jingi is Joe Madaki’s nephew, so the votes that Jingi is expected to bring from the Bwate ethnic clan, Madaki will bring it. Thus, choosing Jingi may not add political value. Many observers opine Fintiri could have picked his running mate from Hong or the Numan federation and thus be sure of massive votes from there.
On the other hand, Senator Bindawa’s running mate- Honourable Babale Martins was Chairman, Toungo Local Government from 1997 to 1998; Member, House of Representatives, 2003 to 2011. He is a well experienced grassroots politician. But of what value is he to Bindawa? Babale is from the Chamber tribe in Adamawa south, if the Chamber tribe decides to vote their son, it will be a game changer. The Chamber tribe has the largest voting population in Adamawa south. And have had the quest to produce a governor or deputy governor for long.
However, retrospectively, having been allocated all of Adamawa south slots (Kanasari was running mate to Adamu Modibbo, Yusuf Janwe was the senatorial candidate, while Mahmud Gurumpawo was the candidate for House a Representative,) by the defunct ANPP in 2003, the ANPP lost massively to the PDP in Adamawa south, albeit owing to Atiku being in the PDP then. If APC must celebrate victory in Adamawa south after the election, they dearly need Atiku. Though Atiku’s candidate- Ibrahim Mijinyawa was defeated at the APC primaries, getting Atiku’s support for Bindawa should not be difficult because Babale was the Director General of Mijinyawa’s campaign organization.
Senator Bindawa will count on three things from Adamawa south- Atiku’s influence, the Chamber people’s votes based on ‘sentiment’ and ‘scavenge’ votes.
As earlier said faith, mother-tongue, geography and money-politics will also shape the voting pattern in some localities. These are touchy issues, but regrettably have always played a major role in the politics of Adamawa state.
Religion will be of less prominent influence in the election because both candidates are Muslims, but Fintiri will get most of the votes from Christians of the so-called minority tribe, because their displeasure of Murtala Nyako has turned into admiration for Fintiri.
Tongue will also play a major role; the choice of running mates already indicates that. Fintiri will do very well in Michika, Madagali, while Bindawa is expected to do well in Mubi North and South. Numan federation will vote massively for Fintiri, while Chamber/Ganye chiefdom is expected to be won by Bindawa. One interesting place will be Hong/Kilba- the kilba tribe appears undecided in the present politics. For instance there were five gubernatorial candidates from the kilba tribe –Marcus Gundiri, Aliyu Kama, Idi Hong, James Barka and Boss Mustapha- Mustapha lost at Hong to Senator Bindawa during the APC primaries. Voting pattern from Hong will be very interesting, but Fintiri may win in Garha, Pella and Hong, while Bindawa may capture Uba Hilde.
Another interesting place will be Adamawa central; the zone has a very large voting population and predominantly Hausa-Fulani. It is a cosmopolitan area and occasionally record voter apathy. Yola North and South have a very large voting population; whoever wins those two areas may have tremendously heaped his votes.
The October 11 Adamawa governorship election result may be neck and neck, but as mentioned earlier, mundane factors- mother-tongue; geography; faith and usual Nigerian money-politics will have a major impact on the outcome of the election. One unfortunate thing in Adamawa politics is, most poor people and local politicians will vote based on their ‘stomach’ needs, while a number of the educated and working class population will vote based on faith and tongue. This is how most people usually vote in Adamawa; they eat their future, instead of them to use today in the spirit of tomorrow.
Zayyad I. Muhammad writes from Jimeta, Adamawa State, zaymohd@yahoo.com 08036070980. He blogs at www.zayyaddp.blogspot.com

Between Atiku and Boni Haruna