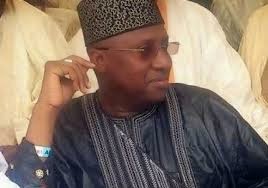 Adamawa state Governor-elect, Mohammed Jibrilla Bindawa, was recently reported to have declared his unalloyed loyalty to former governor Murtala Nyako. Bindawa was quoted to have said that he rode on the back of the ousted former governor, Murtala Nyako to win the April 11 governorship election. Bindawa applauded Nyako for giving him a platform to contest on.
There are also insinuations that Nyako’s son, Senator-elect Abdulazeez, who was the de facto governor of his father’s regime is working aggressively to assemble the government for Bindawa. If this is true, then the Adamawa people should be ready for Nyako’s overriding influence in Bindawa’s government.
In fairness to Bindawa, mere saying ‘I am an Nyako man’ does not entirely mean he will subject his government to Nyako’s control. However, when Bindawa begins to assemble his cabinet, we will know the true direction of his government. Bindawa might have been advised to make that statement to reiterate his loyalty as some Nyako men have started accusing him of betrayal.
Adamawa people must make sure Bindawa’s administration which is a product of ‘change’ is free from the shackles of some Nyako’s men who have been associated with Adamawa’s under-development. In fact, the stakeholders in the state must sit-up to prevent the state from derailing back to the unfortunate years of Nyako’s many blunders. Nyako’s 8 years in power were mostly characterized by wide disconnect between the government and the ordinary people; governance and policy making was centered around his family, friends and village members; third-rate politicians and gold diggers made up a greater percentage of his confidants and openly usurped political positions and government contracts for his friends and family. Cronyism was widespread in Nyako government and some Nyako’s men admitted to it publicly claiming it was only 0.273% not the 30 % as claimed by the Governor’s adversaries.
The Adamawa state Governor-elect, Senator Mohammed Jibril Bindawa has assumed a post of prime political relevance in Adamawa state at a critical and difficult moment. His political future will be determined by the way he approaches the much needed development in the state and his ability to align his government to the reality on ground without letting any political jobbers and rent seekers hijack his government.
Bindawa’s performance in the Senate was not a sterling one in the areas of quality of issues raised in the red chambers and project he influenced to his constituency, though we must give him credit for his stance on the emergency rule imposed on Adamawa state and his effort in promoting the use of vigilantes in the fight against Boko Haram.
Being very young, Bindawa’s political future is bright. He must work tirelessly along the lines of the ’change’ that brought him to power – a new thinking that will differentiate between politics and policy. Bindawa should build on the little gains made in the security situation in the state; close the obvious division in the state along ethnic and religious lines. Total loyalty to Nyako or any godfathers or their ‘men’ will be a mistake Bindawa should avoid. Bindawa should remember that, when Nyako was in trouble, some of Nyako’s men were the first to abandon him and said many bad things about him. Those people are now hanging around Bindawa claiming that they gave him the platform to run for governor.
As a politician, we do not expect Bindawa for fight or abandon Nyako’s men, but he must be smart enough to avoid some of the wrong paths Nyako trekked through.
Zayyad I. Muhammad writes from Jimeta, Adamawa State, zaymohd@yahoo.com, 08036070980. He blogs at www.zayyaddp.blogspot.com