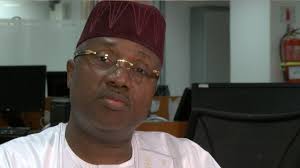 Both supporters and antagonists of Adamawa state governor, Muhammadu Umaru Jibrilla Bindow share a common view- that the Governor has performed well so far, and is doing excellently well especially, in terms of infrastructure development. However, he has also failed woefully in certain strategic areas. With regards to infrastructural development, his critics have been able to pick holes in his work. For instance, the appearance of potholes in some areas of newly constructed roads has brought up questions about the quality of the roads and whether they are built to lasting quality. Some civil engineering experts opine that the quality of the roads ought to be at least 6 to 8 inches compacted aggregate of laterite, stone dust and gravel as a base for at least 8 inches asphalt pavement. On the contrary, Governor Bindow’s roads are made of just laterite as a base for few inches of asphalt pavement. This is one of many discrediting analysis of Governor Bindow’s new constructions.
The development drive has also been concentrated within the state capital and a few towns, which has earned the governor the sobriquet ‘state capital governor’ among his critics.
Governor Bindow has also failed in the aspect of workers’ salaries. Teachers, healthcare and local council workers are being owed salaries of several months. The workers’ screening exercise embarked on, was also handled shoddily; some workers who have served the state for many years were alleged to have been screened as ghost workers. Though, Adamawa state has a bloated workforce and fraud-riddled workers’ payroll.
Governor made a political blunder in his failure to manage the widening division within his own party and the growing disconnect between him and some political bigwigs in the state. Governor Bindow erred by sidelining many members of the legacy parties- ACN, CPC and the ANPP. The only political bigwig that is with the governor is former vice president Atiku Abubakar. And Atiku’s well-established vast political structure, immense war chest and history of successes in political battles has emboldened Bindow so much that some political observers believe the governor often appears ‘self-assured’ in the murky waters of Adamawa politics. There are even insinuations that Bindow has started reaching out to some of his governor-colleagues to support Atiku’s quest for presidency come 2019. Well, it is politics.
Nonetheless, while Bindow feels safe in Atiku’s arms, he faces a formidable opposition, or better said, a ‘threat’ within his political party, the All Progressives Congress (APC), that may easily consume him. And his opponents may have an edge over him if they play their cards together and smartly- they will sway aggrieved members of the APC and they may also have ‘Abuja’ on their side.
There is need for Bindow to look inwards and start re-engaging all APC stakeholders, instead of just local government party chairmen. Politics is all about state-wide development, party politics, patronage and representative engagement. Bindow has scored low in all.
Looking at the current atmosphere of Adamawa politics, the masses’ view of governance is that the governor and his few lieutenants have cornered everything. Other important stakeholders are just doing ‘siddon look’.
The fear for the governor is, when the chips are down, most of his right men today will not swim and drown with him. And, equally important, despite Atiku’s immense war chest, of recent, winning elections in Adamawa is becoming very difficult for Turaki – his preferred candidate, Yayaji Ibrahim Mijinyawa, lost twice, the Adamawa APC governorship primaries.
If he must succeed, Governor Bindow needs to redress his style of politics. There is still ample time for reconciliation, realignment and the spirit of give and take, because most the ‘arms’ around him might not be able to hold him when the storm comes.
Zayyad I. Muhammad Jimeta, Adamawa State, zaymohd@yahoo.com 08036070980

The Gang-up Against Ribadu