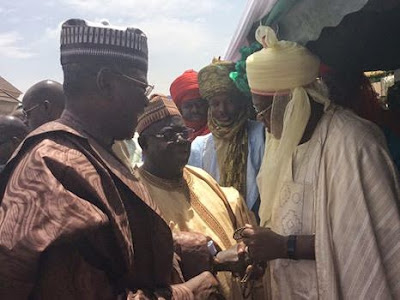 Many of the first-term governors-elect are coming on board without a well articulated programme and policy for their people. The ‘change’ phenomenon and the Buhari tsunami have brought in some unprepared governors especially in the northern part of Nigeria. The society must help these set of elected public office holders to start good and end excellent.
The Sule Lamido model of development is an excellent working document for most governors-elect to emulate and benchmark in their developmental strives. I often christen Governor Sule Lamido’s style of development in rural Jigawa as ‘Big Project from Small Money.’ Sule Lamido administration have initiated and completed many projects that are milestones as well as being in line with Jigawa’s needs.
The main reason the new governors-elect especially those in northern states with similar geographical, cultural and economical terrain with Jigawa should religiously adopt Governor Lamido’s development strategies is; the governor‘s development plans are based on new thinking and sound decision making. Governor Lamido’s careful planning and execution of people oriented projects and programmes, including the visibly enhanced economic growth and quality of governance in Jigawa State is clearly an indication that, despite the general poverty of ideas among most public office holders and the scarce resources in most northern states, there are leaders who are genuinely committed to people oriented and sustainable development. For instance, while most states were crying and pointing fingers at the Federal Government for their inability to pay workers’ salaries; Governor Lamido has not only paid salaries, but busy commissioning new projects.
Despite the meagre resources and the population of Jigawa people being mainly rural dwellers and peasant farmers, the governor was able to identify what the Jigawa people dearly want. This is how leaders ought to be- futuristic in thinking.
Governors-elect who wholeheartedly want to bring real development to their people must adopt the Lamido concept and strategy of development in agriculture, roads, education, electricity, healthcare, water supply, transportation, youth development and other sectors. Governor Lamido was able to achieve the visible remarkable development in Jigawa through the segmentation of the various sectors into their smallest unit, then a head-on tackling of each unit.
Lamido has become a role model for those aspiring for and holding political offices, because he has exhibited what is expected of elected leadership. For first-term governors-elect who truly want to bring development despite the current meagre resources; governor Lamido’s development strategies will be a great helping-hand.
Zayyad I. Muhammad writes from Jimeta, Adamawa State, zaymohd@yahoo.com, 08036070980.