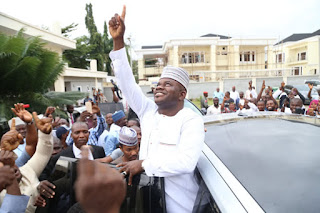 The September 20th 2016 Supreme Court’s verdict in favour of Governor Yahaya Bello of Kogi state has finally put to rest the legitimacy issue that has trailed his government since its inception on January 27th 2016. Bello will now assert full authority and put a strong personal stamp on his government.
Governor Yahaya, one of the youngest governors in Nigeria has found himself in the saddle of responsibilities at a period that Nigerians’ quest for change is strong, and peoples’ expectations from the leaders are very high. This is because most states, including Bello’s Kogi have witnessed a near breakdown of most systems- high level of poverty, corruption, energy crisis, insecurity and the pitiable misrule.
Governor Bello’s four years in office are very critical for him, if he is truly determined to make any difference as a young man. A man many young Nigerians are hoping his achievements will serve as fulcrum for youths to prove a point that they can lead in creative and innovative ways during a period of uncommon challenges.
The Yahaya Bello I know during my short stay at the Revenue Mobilisation Allocation and Fiscal Commission (RMAFC) will make a difference. He was at the Allocation Department, while I was at Planning, Research and Statistics. Working with the speed of the expectations of most Kogites, Yahaya has already formed a team of great thinkers- silicon-valley-thinkers; men and women who can move the government with the speed of the imagination of most Kogites; those whose senses of judgment are centered on the challenges of un-locking the future for ordinary people. And they are already bringing new direction to the public sector’s role in providing the needs of the people.

Within a short time in office, Bello was able to fix many roads, including the notorious bad section of the Lokoja-Ajaokuta Road around Ganaja Village , despite being a federal government road. Bello has gradually cleared salaries for workers at the 21 Local Government Areas in Kogi State and the process is still ongoing while the Kogi State Staff Review and Complaints Committee is doing an excellent job. Bello has gladdened the hearts of many young Nigerians who have been following his steps- his ability to transparently utilize the FG bailout fund- Kogi is the only state to have released the facts and figures on how the bailout funds was spent. The Governor has organized a retreat for his political appointees on innovative strategies for development, a plausible step which will make his aides be in tandem with the new direction.

Innovative and good leadership always think for the future, Bello has demonstrated that he is a young man that thinks for the future- his government is at the final stages of signing a Memorandum of Understanding (MoU) with JUMA International, LLC, a US based company for foreign direct investment worth One Billion Dollars in Agriculture and Agro-allied technology. The governor also promised to construct a Sea Port Terminal in Lokaja.
Governor Yahaya Bello said that, “there was no victor, no vanquished” for his victory and his emergence as governor was ordained by Almighty God. There are political challenges ahead, but for sure, Governor Bello and his team will be the engine room for greater equality of opportunities for all Kogites. He will build a system that will swing the government away from the traditional methodology of concentrating on only ‘off-the-shelves’ ways of improving governance. Governor Bello has proved that he will bring new feasible ideas that would trigger development; eradicate poverty by uplifting individuals, fight crimes with employments and opportunities and fight official corruption the ways it ought to be. However, Kogi people should brace up for difficult political and economic reforms resulting from a quest to form new directions and reengineering that show the administration thinks at the speed of the expectations of ordinary people. Kogi people need to be patient as their young governor gradually institutionalizes new political, economic and social order for the state.
Zayyad I. Muhammad writes from Jimeta, Adamawa State, zaymohd@yahoo.com, 08036070980