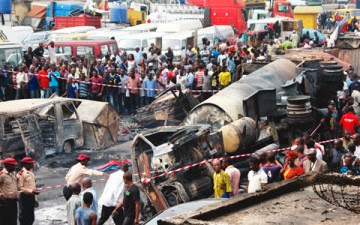 At least 15 people lost their lives in Lagos on Tuesday night when a tanker laden with 33,000 litres of petrol lost control and rammed into vehicles at Kirikiri, Lagos.
Our correspondents learnt that the tanker spilt all its content, thereby causing the fire that burnt a branch of Sterling Bank at Berger Suya Bus Stop, one Automated Teller Machine, 11 vehicles and 60 shops.
Most of the dead were said to be passengers of a commercial bus (danfo) that was behind the tanker when it fell and exploded.
An eyewitness claimed that the fire caused by the explosion spread to Suya spots in the area and burnt parked vehicles . He added that the body of the tanker driver was glued to his seat for over 40 minutes before rescue officials removed it.
A commercial bus driver, Murhi Lawal, who spoke to journalists while weeping profusely, said his bus was completely consumed by the fire.
He said, “Around 10pm on Tuesday, my bus developed a fault so I parked it in front of the Sterling Bank branch. However, the guards on duty said I should move the bus elsewhere so I decided to park on the other side of the road so that I could buy a fan belt.
“As I was attempting to install the belt, I saw the big truck speeding and it rammed into two vehicles before falling on its side and spilling all its content.
“I subsequently heard an explosion and then fire ensued. Before I could save my bus, the fire spread and consumed it.”
Some residents of the area told our correspondent that immediately the accident occurred, 15 people, mostly passengers of a commercial bus, lost their lives.
They said that Capital Oil, Julius Berger and Swift Oil deployed water trucks to put out the flames.
It was learnt that as they fought the fire, it continued to spread to other streets.
A shop owner, Collins Okafor, who claimed to be part of the rescuers, said he counted 13 bodies, excluding those of the tanker driver and his assistant.
He said, “Immediately after the explosion, we came together and started fighting the fire. We tried to save people but about 13 bodies littered the place. The tanker driver and his assistant were also burnt to death.
“One policeman was severely burnt by the fire but we were able to save him. We then proceeded to Sterling Bank and forced the gate open. The security guard had collapsed but we brought him out and he was taken to a nearby hospital.”
One of our correspondents, who entered the premises of the bank, observed that its heavy duty generator was completely burnt.
The banking hall was also burnt while computers and other equipment were said to have been stolen by hoodlums during the rescue operation.
The President, Berger Business Community, Mr. Okey Udeagba, said about five injured traders were rushed to hospitals.
Udeagba said the market had been closed due to the fire, adding that traders alone lost at least N100m due to the incident.
He said, “We did not lose any member to the fire but five people were injured and are recuperating in different hospitals. Most of those killed were passengers and bystanders. However, we lost over N100m to the fire.
“One of our members, Jones, lost all his goods which were stored in a truck while his shops were also burnt. He is probably the biggest victim financially speaking.”
He urged the state government to indemnify the victims and also avoid demolishing the shops.
When one of our correspondents approached Jones for comment, he said he was too distraught to speak on the issue.
Another victim, Okechukwu Mmadu, said he lost 12 heavy duty engines worth N8m to the fire.
He said, “When the accident happened, the truck spilled petrol into the gutters, leading to our shops. When the fire started, it spread to our shops through the gutters. I immediately fled but luckily not all my goods were burnt,” he said.
Policemen, officials of the Federal Road Safety Corps and the Nigeria Security and Civil Defence Corps were seen controlling the crowd at the scene.
The spokesman, National Emergency Management Agency, South-West Zone, Ibrahim Farinloye, said the fire was put out around 1am on Wednesday.
Farinloye said, “Fifteen bodies were recovered by NEMA and the police. The fire was put out by a combined team of federal and state fire services. The fire lasted for about three hours. Many vehicles and 60 shops were affected.”
The Baale of Ibafon, Kayode Okunlola, said there was a need for the Federal Government to curb the excesses of truck drivers, especially in the area.
The General Manager, Lagos State Emergency Management Agency, Dr. Femi Oke-Osayintolu, said the injured victims were taken to the Lagos State University Teaching Hospital, Ikeja and Gbagada General Hospital, Gbagada.
Oke-Osayintolu said a soil test would be conducted to ascertain the strength of the affected buildings after which the area would be fumigated.
The PUNCH gathered that three injured victims were admitted into the Gbagada General Hospital, while others were referred to other general hospitals in the state.
Two of the victims at the hospital in Gbagada are 23-year- old Suraju Adeniyi, who suffered 80 per cent burns and 45- year- old, Moses Adebayo, who suffered 40 per cent burns.
Another victim, 70-year-old Mrs. Rose Idowu, was said to have been rushed to the Lagos State University Teaching Hospital, Ikeja, where medical personnel battled to save her life but she passed on within an hour due to the severity of the burns she suffered.
www.punchng.com