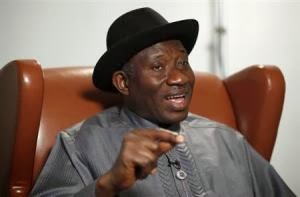 President GoodlucK Jonathan last night met state governors from his ruling Peoples Democratic Party in a continuing effort to end the crisis which has seen five governors defect to the opposition APC.
The party has been locked in a bitter feud with seven governors and other big shots, including former vice president Atiku Abubakar, accusing the leadership of dictatorial tendencies.
Repeated meetings with the President have failed to resolve the crisis which came to a head last week with the defection of five of the seven governors to the All Progressives Congress (APC).
In a last ditch effort to woo them back the President fixed another meeting for yesterday but sources said only Babangida Aliyu of Niger and Sule Lamido of Jigawa states attended.
Aides of the five other governors told Daily Trust last night their principals were in Abuja but they declined to comment on why they did not show up for the meeting with Jonathan.
Earlier in the day, PDP governors who supported Governor Jonah Jang to be chairman of the Nigeria Governors forum met at the Akwa Ibom governors lodge.
They reportedly agreed to take advantage of the exit of Governor Rotimi Amaechi from the party to make sure its members who have not left for the APC are prevailed upon to start identifying with the Jang led faction of the NGF. These are Mu’azu Babangida Aliyu and Sule Lamido of Niger and Jigawa states respectively.
The move, according to a source at the meeting, is to enable the Jang led faction have the majority number of governors in its fold in order to displace Amaechi and discredit his claim to the chairmanship of the forum.
To this end, the governors decided that the PDP should waste no time in welcoming them to the fold of the party while overlooking all previous statements they may have made against the party while with the new PDP.
Further to this, the governors suggested that a National Executive Committee (NEC) meeting of the party should be convened within the week to make a pronouncement on the two former nPDP governors as well as ratify the decision of the party’s disciplinary committee to sack members of the nPDP.
Culled from Daily Trust

Those Who Signed Ndume out of Senate Leadership