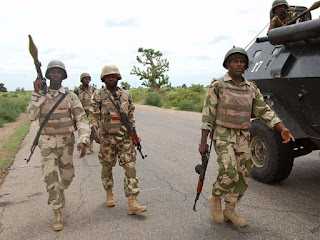 The Nigerian troops have repelled an early morning attack by the Boko Haram terrorists on Dar village of Madagali Local Government Area of Adamawa State.

Reports from the affected areas indicated that at the early hours of yesterday, the terroristsin their hundreds lunched an attack but they were immediately repelled by the troops at the entrance of Dar village in Madagali few kilometers to Sambisa forest.

The reports claimed that the terrorists had regroup and put up a fight to recapture some of it enclaves in Sambisa forest following the recent fall of the forest to the troops.

However the report claimed that there were no casualties in the attacks
Confirming the incident, the Chairman of Madagali Local Government Area, Alhaji Yusuf Mohammed, said the terrorists were contained by the prompt action of security operatives in the areas.

He lauded the efforts of security agencies and vigilante in the area and called for the people’s support.
Also confirming the development, the Public Relation Officer of 28 Task-force Battalion, Mubi, Maj. Akintoye Badare, said the attack was successfully repelled with no casualty on the military side.

“All I can confirmed to you now is that there was attack on Dar village but we successfully repelled it; no casualty on our side,” Badare said.

He said things have normalized, adding that security agents were on top of the situation as soldiers are condoning off the areas presently.