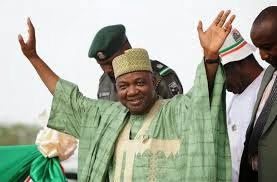 It appears Vice President Namadi Sambo is on a ‘long tumultuous’ journey to 2015. His fate as the number two in President Goodluck Jonathan’s quest for a second term is unclear.
There are many issues surrounding Sambo’s political influence in the Jonathan administration. And his opponents are riding on the back of these issues in the attempt to drop him from Jonathan’s second term. The most potent of these issues is Sambo’s seeming lack of strong base, influence and appreciable number of followers at his immediate constituency- the northern region.
Sambo’s adversaries have been buoyed by his omission from the People’s Democratic Party (PDP) endorsement of GEJ as its sole candidate in the 2015 presidential election. And they are increasingly capitalising on his weakest point- his lack of political influence and strong followership in the north- the region where he is supposed to be the number one political leader.
Had Sambo been included in the People’s Democratic Party (PDP) endorsement of GEJ as its sole candidate in the 2015 presidential election, it would have help to avoid rumors and uncertainty about his future in the Jonathan administration.
Is Jonathan not comfortable with Sambo? Observing the pair, one would see that there is a good rapport and understanding between them. Would it not be a big gamble by President Jonathan to replace Sambo? Sambo appears not to be crossing his political limits. Every President would love to have a VP like Sambo. There seems to be no ‘political’ friction between Goodluck and Sambo. Would retaining Sambo assist Jonathan to get more votes from the north besides the expected ones? Certainly no. Does replacing Sambo change that? No. But why did the PDP not included Sambo in the endorsement? What are the game plans?
The PDP suffered its greatest setback in the north during the GEJ administration. More disparaging for Sambo is that the major players in the crisis were governors from the north, the region where he is supposed to be the number one political leader. Being a sitting vice president, Sambo was supposed to be the point-man for President Goodluck Jonathan in the north, but he appeared helpless during that well-known PDP- G7 crisis.
Sambo’s inability to make a reasonable impact during the crisis seriously affected his political importance in the GEJ administration. Thus, those who want his position became very happy as it was obvious he lacked necessary control of the political followership in his region. Sambo also failed to use the crisis to make a strong political statement that he can carry the PDP and GEJ to victory in the north in 2015. In his defense, Sambo’s sympathizers claim that he has not been given the political window to play an active role like former VP Atiku during the Obasanjo era. However, his adversaries opine that this further indicates that he lacks a strong base in the north. And thus, he is viewed as not being able to bring fruitful results, even if such window is available.
Sambo’s adversaries say his weak political influence and followership in the north is a minus for GEJ’s second term bid, because the north- Jonathan’s major political headache- sees Sambo as unable to do anything for himself politically, let alone the northern region.
Notwithstanding the above arguments, any attempt to edge out Sambo will be pure politics. The events of the coming weeks, especially GEJ’s official declaration will give us clear indication on Sambo’s fate.
Should he be eventually dropped, people like Governors Sule Lamido, Ibrahim Shema and the likes with strong political clout in the north will be the major contenders.
Zayyad I. Muhammad writes from Jimeta, Adamawa State, zaymohd@yahoo.com 08036070980. He blogs at www.zayyaddp.blogspot.com