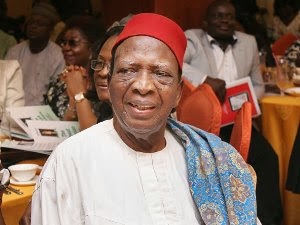 Professor Ben Nwabueze’srequest to President Jonathan to be allowed to produce a draft constitution for consideration by the proposed National Conference has come under criticism, with the Arewa Consultative Forum (ACF) describing the proposal as troubling.
Nwabueze had recently asked Jonathan to convert a small committee that is already meeting in his house into a Presidential Committee to draft a constitution.
Senior lawyer Femi Falana, in his reaction to this, said: “Nobody can write a Constitution; it has to be done by the people.”
Nwabueze had also asked Jonathan to insert a clause into the proposed National Conference’s enabling law forhis draft constitution to be laid before it and to “form the basis of its deliberations and decisions and to be piloted through the conference by the members of (Nwabueze’s) committee.”
But the ACF yesterday issued a statement, saying there was no basis for Jonathan to allow Nwabueze’s select group to draft a constitution for consideration by the National Conference.
“(The) Forum has read with great concern reports credited to Professor Ben Nwabueze to the effect that he wants Mr. President to mandate him to draft the people’s constitution for consideration in the proposed conference,” ACF spokesman Anthony N. Z. Sani said in the statement.
“We do not want to believe the reports, precisely because there is a National Advisory Committee charged with the task and responsibility of collating views for the purpose of advising the government on the mode, nature and content of the proposed conference.
“That Professor Nwabueze and some sections of this country have managed to sell the idea of the conference to the government and to the good people of Nigeria do not qualify him to seek to determine the outcome of the conference upfront.
“More troubling would be the impression created in the minds of Nigerians that the conference is intended to produce a brand new constitution, whereas no sitting
government has the constitutional right to discard the existing constitution in favor of a new one. We hope Professor Nwabueze is not attempting to make the conference sovereign irrespective of the advice by the advisory committee.”
In his reaction, former senator Saidu Dansadau said Nwabueze’s idea amounted to playing with the intelligence of the president.
Dansadau accused Nwabueze of making subtle moves to impose his personal opinion on Nigerians using the national dialogue as a launch pad.
He said Nwabueze resigned his appointment as a member of the Femi Okoruonmu-led National Dialogue Advisory Committee on health grounds, but now turned round to smuggle his ideas through the backdoor.
“My assumption is that he resigned his appointment in the first place because he was not made the chairman of the committee. He must have felt that as far as the issue of dialogue is concerned, he is a more competent person than Femi Okoruonmu to be the chairman of the committee,” he said.
Dansadau urged Jonathan not allow himself to be used by “selfish individuals to promote their selfish agenda,” as this would portray his government in bad light.
He also said if Nigerians were sincerely ready to discuss the critical issues bedeviling the country then there should be a “sovereign” national conference.
For his part, Falana, who spoke to Daily Trust by telephone last night, said also that the mandate of the proposed National Conference should include issues of the economy, the nation’s future, corruption, the rule of law, presidential or a parliamentary system, and unicameral or bi-camera legislature among others.
Daily Trust Newspaper