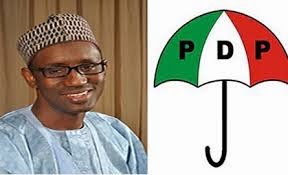 The results of the Presidential and National Assembly elections have brought surprises and further gingered-up the political atmosphere across the nation as we get ready to go to the polls for the governorship elections. The Adamawa governorship race is not left out. And Adamawa citizens and contestants are anxiously waiting to know if the ‘rice and beans’ mantra – cast your vote to candidates regardless of their political parties – that swelled the atmosphere prior to March 28 will work this time around.
I am one of the numerous Adamawa citizens that believed in and passionately sang the mantra for the 2015 elections.
‘Rice and beans’ advocates painstakingly sold the idea to many willing listeners, believing that a deal had been done. But, alas, after March 28, 2015, we got our results – a total rejection of the idea by many ordinary Adamawa people. In some parts of Nigeria, including Adamawa State, the People’s Democratic Party (PDP) was overwhelmingly rejected to the extent that anybody the All Progressive Congress (APC) presented was voted for. I know of a candidate who in an ideal situation cannot win a councillorship position in his ‘adopted’ ward, but was elected a Senator of the Federal Republic of Nigeria! Moreover, he defeated one of the finest candidates in the race in Adamawa state.
Many people are advocating for the ‘rice and beans’ pattern of voting, despite the fact that they fully understand that many people are angry with the PDP because of certain factors, including the failure of the party to combat the insurgency in the North-East which has devastated parts of Adamawa State. Will the governorship polls follow the same pattern? Or will ‘rice and beans’ be full of stones, thus unchewable?
The Adamawa governorship race is exceptional in relation to other states. This is because the state has been grossly mismanaged for many years. And out of the four main candidates contesting for the governorship position, Nuhu Ribadu stands out in terms of work experience, a rich curriculum vitae and the capacity to rescue the state. The public consensus in Adamawa is that the state needs a paradigm shift in terms of development because it is years behind other states in terms of socio-economic progress. It is time to salvage the state. Nuhu is well-cultured, well-read and has an integrity to protect, meaning that he is well resourced to leapfrog Adamawa’s development to where it is supposed to be.
Zayyad I. Muhammad writes from Jimeta, Adamawa State, zaymohd@yahoo.com, 08036070980.