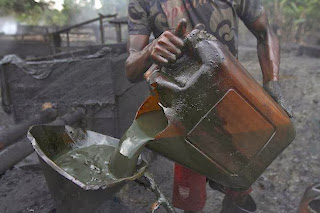 The International Monetary Funds (IMF) yesterday said that oil theft and production loss have adversely affected Nigeria’s economy.
Presenting a report of the recent visit of IMF’s officials to Nigeria’s finance minister, Dr Ngozi Okonjo-Iweala, and the Governor of Central Bank of Nigeria (CBN), Malam Sanusi Lamido, in Washington, DC yesterday, Mr. Gene Leon who led the visit said that oil theft and production losses have adversely impacted export receipts and government revenues, leading to a significant drawdown from the Excess Crude Account.
The report however noted that Nigeria’s economy had continued to perform strongly in 2013, stressing that real GDP had grown by 6.8 per cent in the third quarter of 2013 (compared to third quarter 2012), supported by robust performances in agriculture, services, and trade.
It also said that inflation declined to 7.8 per cent (end-September 2013) from 12 per cent at end 2012, in part owing to lower food prices and monetary policy implemented by the Central Bank of Nigeria (CBN), adding that the exchange rate had been stable, and the banking sector was well capitalised with low levels of non-performing loans.
The report reads in part: “Although the outlook is positive, risks need to be managed.Growth is projected to increase to about 7 per cent in 2014, while inflation should remain subdued in the single digits. Nigeria could be affected, however, by a decline in oil prices, the pace of recovery in global economic and financial conditions, capital outflows, continued losses in oil production, or increased security concerns. At the same time, the economy can manage such shocks given a relatively flexible exchange rate regime, improved financial crisis management capacity, and a stable banking system. But fiscal buffers are low and a sustained high rate of growth is needed to reduce unemployment, and poverty.
“Fiscal consolidation is progressing well, and the momentum needs to be preserved through the ongoing election cycle. Key public financial management reforms are underway, including the implementation of a Treasury Single Account (TSA) and integrated information management systems, but lower-than-budgeted oil revenues are impacting budgetary plans at Federal, State, and Local levels and highlighting the need for rebuilding fiscal buffers to manage oil revenue volatility.”
culled from leadership.ng