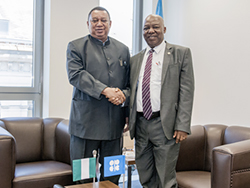 Vienna, Austria, 30 August 2016–OPEC Secretary General HE Mohammad Sanusi Barkindo met with HE Gazing Jessy Napmwang Dangtim, Charge d’Affaires of the Permanent Mission of the Federal Republic of Nigeria to Austria and Slovakia, at the OPEC Secretariat.
Mr. Dangtim, who was accompanied by the First Secretary at the Nigerian Embassy, Mr. Charles Oko, congratulated the Secretary General on his new position. He said Nigeria is proud of Mr. Barkindo’s appointment as the head of the Organization, adding that he is ideally suited to meet the challenges facing the global oil market today.
The Secretary General said he was grateful for the support and looked forward to working with OPEC’s Member Countries. He recalled OPEC’s ‘founding fathers’, who he described as “visionaries” who saw the wisdom of working together in order to support and promote market stability. Today’s challenges, he said, are a reminder that producers need to “return to basics” and further enhance efforts at working cooperatively.
The Secretary General noted that the oil industry tends to move in cycles, which is a constant challenge to market fundamentals. As a result, he said, it is the general consensus of the industry that some form of coordination is needed among producers.
The officials discussed other issues as well, noting that one of the main challenges ahead is continuing to strive for stability in oil producing countries like Nigeria. Such efforts are essential to ensuring a reliable supply to the global market.
The Secretary General also said he supports Nigeria’s ongoing efforts to diversify its economy, expanding its agricultural sector. The future of Nigeria looks bright, he said, particularly if the continued pace of diversification can be sustained.
source: opec.org

Atiku and the Politics of Waziri Adamawa