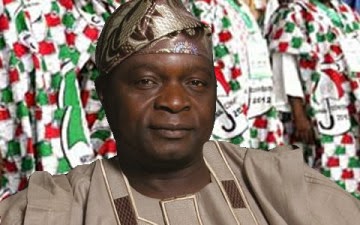 Suspended National Secretary of the Peoples Democratic Party, Prince Olagunsoye Oyinlola, may soon regain his seat at the national secretariat of the party.
Investigations by our correspondent in Abuja on Tuesday indicated that this was one of the possibilities of the reconciliation move to be embarked upon by the new leadership of the party.
Apart from Oyinlola, a former governor of Osun State, a former National Auditor of the party, Mr. Bode Mustapha, may also be brought back to his position.
If the move succeeds, the present occupants of the positions, Prof. Wale Oladipo and Adewale Adeyanju, secretary and national auditor respectively, may lose their positions.
Oyinlola was reinstated by the Court of Appeal after he was removed by an Abuja Federal High Court, but few days after the landmark judgement, the National Working Committee of the party under the leadership of the former National Chairman of the party, Alhaji Bamanga Tukur, announced his suspension from the party
Apart from him, the party also suspended a former Acting National Chairman of the party, Alhaji Abubakar Kawu Baraje; a former National Deputy Chairman of the party, Dr. Sam Jaja; and PDP former National Vice-Chairman, North West, Ambassador Ibrahim Kazaure.
The four men were later summoned to appear before the party’s Disciplinary Committee headed by Dr. Umaru Dikko.
None of them appeared but the committee went ahead to recommend their expulsion from the party.
However, a member of the National Working Committee of the party, who spoke with our correspondent on condition of anonymity, said the mood in the party favour the return of both Oyinlola and Mustapha.
Asked how this would be done, he said the party was at liberty to withdraw its appeal against the case won by the former governor or wait for the Supreme Court to rule on the matter.
He said, “You know he won the case against us at the Court of Appeal and we are appealing the case. We may discontinue the appeal and also lift his suspension which has not been ratified by the National Executive Committee of the party.
“We will wait and see what will happen. But that is the mood in the party now. We need total reconciliation.”
It was also gathered that the party would soon find a way of reaching out to former President Olusegun Obasanjo to appeal to him to reconsider his stand not to take part in the activities of the party anymore.
punchng.com