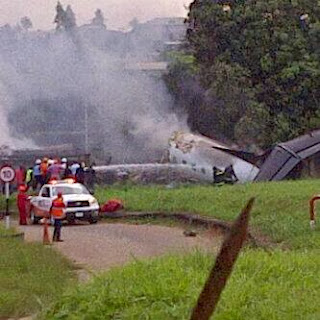 A plane has crashed at the Lagos airport, witnesses and an official have said.
A witness said the crash occurred at the local wing of the airport close to the section were JET-A1, plane fuel, is stored.

Fire service officials were seen evacuating the occupants of the plane.

It is not yet clear if there was any casualty.

The spokesman of the Nigeria aviation agencies, Yakubu Datti, asked for more time to get details of the incident.

But another official, who asked not to be named because he was not authorised to speak on the matter, said the crashed plane belonged to Associated Airlines, and was just about to take off when the accident occurred.

The plane, our FAAN source said, was on its way to Akure.

NO PLAN TO SELL REFINERIES —JONATHAN