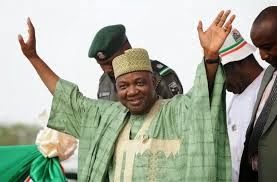 As discussions on the likely outcome of the Peoples Democratic Party (PDP) impasse envelope the Nigerian media space, various postulations have been canvassed by commentators and opinion molders as to their expectations.The one that readily comes to mind is that espoused by one Zayyad I. Muhammed on some pages of some Nigerian newspapers and his blog. On Vice President Namadi Sambo, the writer, who was obviously straying into unfamiliar territory of informed commentary on national issues, made some postulations, deductions and drew conclusions on sensitive political issues that should not be allowed to go unchallenged. However, his expression of the political trends of the post-Makarfi era as they affect the Vice President makes his motive suspect. His display of facts as it relates to the ascension of Sambo to the pinnacle of his profession and the twists of facts he pleaded all in an attempt to justify his arguments are the motivations for this rejoinder so as to put the records in proper perspective and set them straight.
The Vice President of Nigeria, it must be understood, has no defined constitutional duties and responsibilities assigned to him. His joint mandate which is tied to that of the President notwithstanding, he acts on the instructions and directives of the President. The Vice President, no matter how good intentioned he is in aiming to resolve an impasse, must seek the consent and blessings of his principal and in doing so must be careful not to draw the President’s ire. Where he chooses to do so without the consent of his boss it might be misconstrued to mean declaring his boss as weak and incapable of resolving issues. His position in the pursuit of the resolution of the impasse stirred by G7 is not only appropriate but adopting its rightful position on the matter.
More so, the reference to the Atiku-Jonathan efforts at addressing challenges emanating from their respective areas is way out of order. The G7 is made up of governors who are not only loyal but are already paying their allegiances to their masters, except for Kwara whom, we all know, is working for Saraki by proxy. For anyone to claim that the Vice President could not rally them round smacks of an attempt to diminish his status using the impasse as a tool of destruction.
If the G7 governors were on their own, it would be easy to meet with them to cajole them back to the fold. However, the reason for the impasse should not be completely jettisoned, which aims to target the jobs of both the President and his Vice by mobilizing support through persuasions.This explains their visitations to well respected elder statesmen without first laying their cards on the table to the President or his Vice for amicable resolutions. An aggrieved person should first state his grievance and if nothing is done he could then explore other acceptable mechanisms of peaceful resolution. In the present circumstance, no one needs to be lectured that the Vice President is handicapped since no such action took place.
It should be stressed that the first major political appointment of Vice President was a commissioner in Kaduna state in 1986, while that of Makarfi was in 1996, ten clear years after that of Sambo. Similarly, while the Vice President graduated from the Ahmadu Bello University in 1978 with a Master’s degree in Architecture, Makarfi graduated from the same university between 1985 to 1987 with M.Sc Accountancy and Finance. This was the period within which the Vice President was serving the state as a commissioner. In terms of age, experience and exposure, there could be no basis for comparison. The choice of Namadi Sambo ahead of other contestants for the governorship seat was well deserved to all discerning minds. He had financial independence, less controversial and reasonably humble as not to embark on witch-hunts or vendetta against the previous administration. The reasons adduced by critics are merely a smokescreen to cover these glaring qualities.
To demonstrate equity and fairness, the Vice President carefully chose his close aides in the following order of percentage distribution:-Kaduna 21%, Yobe 13%, Kano 13%, Kebbi 13%, Zamfara 5%, Taraba 5%, Delta 5%, Rivers 5%, Borno 5%, Lagos 5%, 0 Kaduna state Special Adviser on Special Duties Senator Isaiah Balat is a Christian from southern part of the state.
Playing safe politically is a good approach as it makes one learn from the mistakes of the past. For those who have previously occupied such seats and challenged their bosses, what benefit had accrued to them or their region from such unjustified actions? Some of the actions of the previous occupants in fact have added to the multiplicity of the problems that subsequent successors are now facing. The art of politicking is not an avenue to promote deception or insubordination but a way to collectively put heads together to work for the benefit of your country and in this regard, Namadi towers above all like a colossus. The Vice President will reach out to those who have mutual respect for him and his boss and not to those who see themselves as the means to an end.
Sulaiman Lawal, Jarman Kauru, wrote in from Kaduna