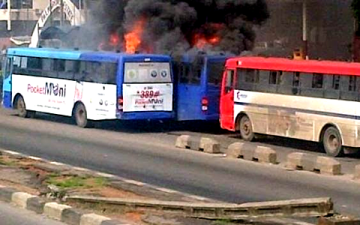 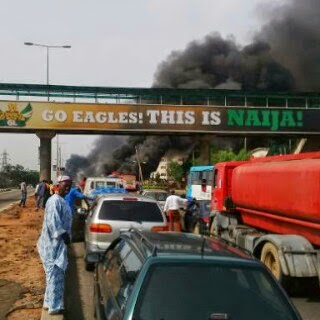 A group of soldiers had gone on rampage and still occupied a section of the ever busy Lagos-Ikorodu Road within Lagos metropolis over alleged killing of their colleague by a Bus Rapid Transit (BRT) bus.
Findings by our correspondent revealed that a BRT bus driver whose name could not be gotten as at the time of filing this report, strayed off its designated lane to knock- off and kill a military man who was riding on a motor-bike.
The death of the army man led to confusion resulting in setting five BRT buses ablaze at Palmgrove Area of the road.
The rampaging soldiers stormed Awoyokun Bus Stop, a stone throw to Palmgrove bus stop, beating everyone in sight before descending on the drivers of BRT buses seen on sight.
The residents and commuters in a bid to avert beating by the soldiers fled the BRT buses in droves as the soldiers went on a beating spree.

culled from punchng.com and http://www.dailytrust.com.ng/