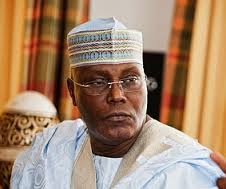 Former Vice President Atiku Abubakar didn’t contest the September 7, 2014, Adamawa All Progressives Congress (APC), Governorship primaries, but he suffered a defeat- a bitter one! Adamawa (APC) Governorship primary election was a litmus test for how strong and rooted Atiku’s political structure and men are in the APC.
Politically thirsty, Atiku fought doggedly for his preferred candidate- Ibrahim Mijinyawa (Yayaji), but Mijinyawa was convincingly defeated by Senator Mohammed Umar Jibrilla (Bindawa) by 2,718 votes to 2,268.
There were some salient reasons Atiku’s candidate didn’t make it.
Firstly, Atiku and his men went to the primaries without a clear-cut direction. Three candidates; Ibrahim Mijinyawa, Boss Mustapha and Yakubu Tsalla all flew Atiku’s flags, and together they garnered 2,930 votes (Mijinyawa – 2,268, Boss – 515 and Tsalla-147). Thus, Atiku and his men wasted their votes. Pundits were surprised by this, considering Atiku’s vast political experience and sophistication. Had they gone to the election with a clear-cut direction in support of one candidate; their collective 2,930 votes would have neutralized Bindawa’s 2,718.
Secondly, Nyako’s men also played a prominent role in defeating Atiku’s. Adamawa APC governorship primary election was a kind of test of wits between Atiku and Nyako’s political structures. Nyako’s men have not forgiven Atiku for his lackadaisical attitude towards assisting former Governor Murtala Nyako during Nyako’s most difficult political moment- the impeachment ‘wahala’. For instance, there are at least five members from the Chamber/Ganye chiefdom in the Adamawa House of Assembly who would have listened to Atiku, if he wanted to save the former Governor.
Thirdly, from all indications, Atiku wanted a puppet and also wanted to restore his hitherto lost unmatched-grip of the politics of his home state. However his candidate is not a ‘governor-material’. Though, young, cool-headed and a onetime local government chairman, Yayaji is not ripe to be a governor in the current political and economic situation in Adamawa. And he does not match Bindawa’s resume. Thus, APC delegates and Almighty God stopped Atiku.
Fourthly, at the time Atiku joined the Adamawa APC, the deal has already been sealed. The party’s executive positions from wards to state level have already been shared among its stakeholders-; Atiku in Adamawa APC is a like a commander without troops.
Well, being a typical Nigerian politician, one should not just blame Atiku, the former vice president dearly needs one of his political associates to win the October 11 Adamawa state governorship elections. Reason being that, he will be able to restore his lost leadership of Adamawa politics; get an opening to control a strong political platform at home front as well as to serve as a soft landing for him if his presidential ambition fails again. Despite this defeat at the primary elections, we should not forget that Atiku’s style of politics is unique- he looks at the future instead of the past. Senator Mohammed Umar Jibrilla needs Atiku’s support and  he will definitely enjoy the former vice president’s full support.
Zayyad I. Muhammad writes from Jimeta, Adamawa State, zaymohd@yahoo.com 08036070980

Ekweremadu: Tenure May be Extended for President, Govs